To share your memory on the wall of Janina Filip, sign in using one of the following options:

Janina will be remembered for her unwavering optimism. She often comforted others with positivity and genuine compassion. She was also a woman that embraced the changing world with grace, despite being raised in a different time and different place. Janina was a fervent reader and had a genuine curiosity to learn everything she could about topics that interested her. Janina loved tending to her flower garden at her New Britain home and enjoyed taking long walks both in her neighborhood and while visiting family.

Janina had the uncanny ability to relate and talk to everyone, from all walks of life and backgrounds. She made everyone she met feel special and cared for. Janina could always be counted on to be the last person to leave a party and loved to people-watch and soak in the fun being had, despite not speaking or understanding English.

Janina was an inspiration to not only her immediate family but also to the people who met her and her family. She leaves behind a remarkable legacy of a life lived happily despite war, death and personal loss. Janina sincerely believed that life is beautiful despite its many unforeseen challenges and that tomorrow will always be better than today.

The family of Janina would like to thank the staff at the Critical Care Center at the Hospital of Central Connecticut, Hartford Healthcare Cancer Institute, Jefferson Radiology, Angel Touch Care and Hartford HealthCare at Home Hospice for all of the care provided to keep our mother and grandmother happy, healthy, and comfortable, even during her last days.

Calling hours will be held for Janina Filip on Monday, January 11, 2021 from 5:00-8:00 pm at the Paul A. Shaker Funeral Home, 764 Farmington Ave., New Britain, CT. A burial will take place in Poland at a later date when it is safe to travel. The family of Janina requests that instead of black attire visiting guests wear bright colors to honor and celebrate her life. To extend condolences to Janina’s family or to share a memory of Janina, please visit SHAKERFUNERALHOME.COM
Read Less

To plant a memorial tree in honor of Janina Filip, please visit our Heartfelt Sympathies Store.

We encourage you to share your most beloved memories of Janina here, so that the family and other loved ones can always see it. You can upload cherished photographs, or share your favorite stories, and can even comment on those shared by others. 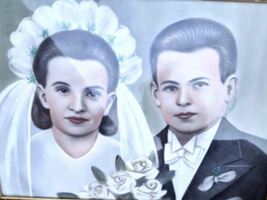